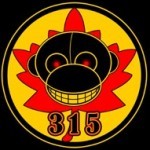 Come and help the Army of the Toy Soldiers in it’s Northern Front Campaign!

The Robot Monkeys come from varied backgrounds, and are part of several different SpecOps. Other than geographical location, the two things that bind them are a sense of friendship and of service.

One of our main emphasises is community service, and the 315th helps with cleaning trash, organizing charity donations, volunteerings and other such services to the community.

Operation: Closet Purge (donation to the Denise House, a women’s shelter in Oshawa.