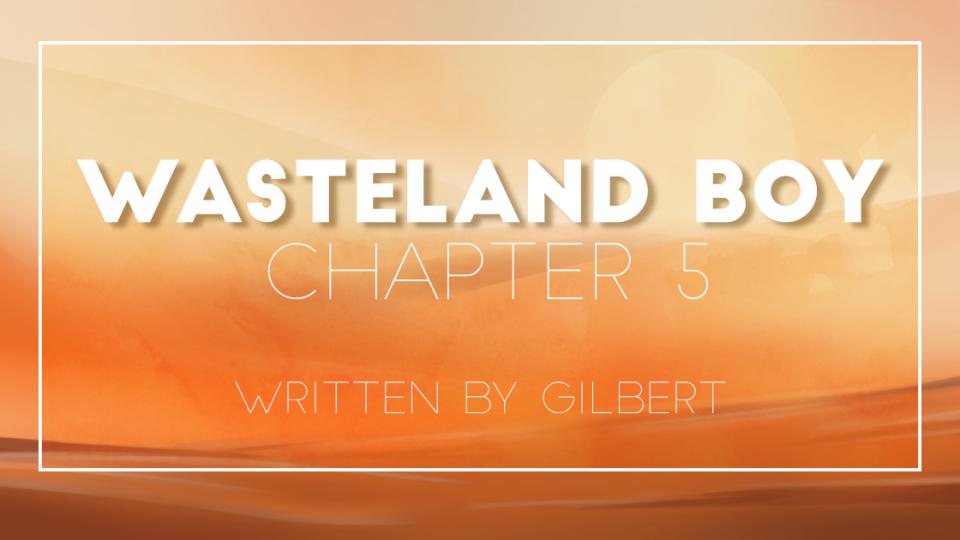 Clyde was stubbornly walking east. The fact that he was lied to for the past years was filling him with frustration, but he used everything to drive him forward. The sun didn’t seem as happy to him anymore, just a blinding heat source that woke him up every day and abandoned him in the darkness every night. Each day was a repetitive silent routine of slowly emptying cans and sore legs. He didn’t see a specific reward waiting for him at the end. He didn’t even know if the end exists. It seemed the wasteland was simply a desert full of unwanted scraps and building ruins leftover from war and eaten away by toxic rainwater. Sometimes, Clyde imagined that there is nothing left of the world, that the whole planet is covered in bunkers and trash. The only thing that saved him is the hope that still lurked in his big heart.

Today would be the day when he finishes his last can of meat. Meat could be stretched out for longer than one day, but Clyde already fed off that can for two days and it felt as if he would pass out any minute. He ran out of water the other day and was now desperately in need of any liquid. The sun was merciless for most of his journey and water didn’t last long. Clyde wasn’t sure how long he has spent here. All he knew was that he would probably collapse soon.

Clyde licked his dry lips and noticed the light of the sun dim a little. He looked up and saw storm clouds that covered the sun, quickly heading in his direction. The last thing Clyde needed was to dissolve, so he spent the time he had before the rain to find a place to hide. He had to go back some significant distance to get to what used to be a small village. Most of it was just piles of bricks eroded by time and rain, but there were a few buildings that managed to keep their shape. Clyde walked into the most stable – looking one and found a room that still had some of the roof leftover. Clyde ran outside and began piling sheets of metal, and really anything he could find that would manage to withstand rain. He covered the frame of the roof to the best of his ability and ran in, waiting for the rain to start. He didn’t have to wait long before he heard the first drops drumming on his roof. He sighed in relief and sat down on the floor, opening the bag and getting out the leftovers of the meat.

Something, or rather, someone, disturbed the monotone of the rain with their quick, light footsteps. Clyde put down the can and backed into a darker corner. The room was empty, he had nothing to fight with. Even if he found a weapon, he was too weak to fight another four- legged creature. But the creature that ran, into his shelter was standing on two feet. It bent over slightly, panting heavily and straightened its wide, colorful skirt. It looked up and saw Clyde.

Her loud, confident voice cut through the rain noise so sharply, Clyde flinched. She straightened out and pointed her finger at him. Clyde didn’t yet figure out whether this person was friendly, but the girl seemed older than him and way stronger.

“Are you one of the orphans?”

It sounded more like a command than a question. Clyde opened his mouth to ask what an orphan is, but realised he cannot talk. His throat was too dry to utter any sounds, just some strange, muffled whistling. Clyde began coughing and turned away. The girl sighed and walked over to him, handing him a plastic bottle of water.

“Here…Just don’t drink all of it”

Clyde snatched it out of her hand and began drinking. The warm water poured down his throat, returning life into him. It seemed to Clyde that he has never tasted or felt anything better. He would probably finish the whole bottle if the girl didn’t take it away.

“That’s enough! Can you talk now?”

Her voice wasn’t as demanding anymore. She smiled gently at Clyde and he nodded unconfidently. Her face was more visible now. She was definitely a girl, maybe even a woman. Her skin was either dirty or very tanned. Approximately the same applied to her clothes, that looked like they were very bright a year or so ago. Her hair was sticking out in all directions and consisted of long, strands of black curls and some colorful dreads made of bright ribbon and string. Clyde made a second attempt at talking.

The girls smile grew a bit wider and she leaned down to match his eye level.

“People without parents. Where are your mom and dad?”

The question threw Clyde off and he didn’t know how to answer. He still had doubts about his mother and couldn’t say she was dead for sure. And his father…Who is my dad? He was slapped in the face with the fact that he never questioned where his father was, let alone knew anything about him. He didn’t know if it’s bad or only natural to be raised without one. So many questions rushed into his head at once and all he could mumble in reply to the girl was

The girl stared at Clyde for a few moments, trying to figure out if he was still dehydrated or traumatized in some weird way. She flipped some hair off her forehead and sat down, leaning against the wall.

“I’ll just assume you are not an orphan for now. At least you don’t look like you’re part of the orphanage. On a completely unrelated note, hello and sorry for intruding your home. I’m Lucinda Garrison, nice to meet you! “

She grinned and reached her hand out to Clyde, throwing way more questions at him. He told himself to calm down and clear his mind.

The girl laughed and grabbed his right hand, shaking it as if it was supposed to fall off, but was stuck for some reason.

“It’s for shaking it, stupid! when you introduce yourself to someone, you shake their hand!”