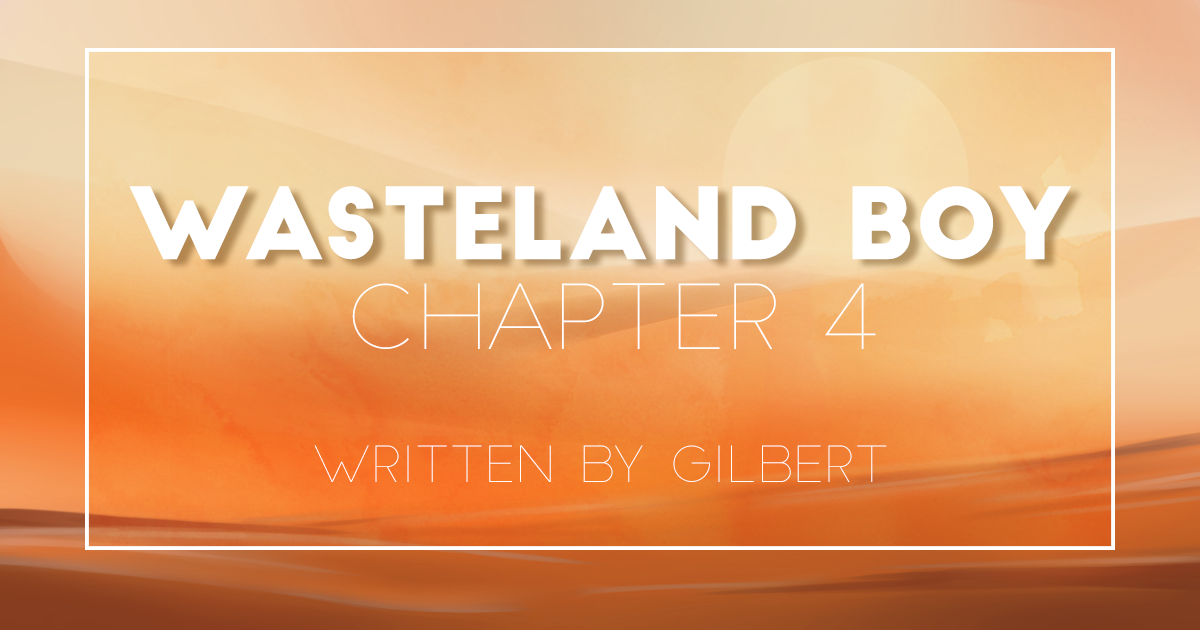 He woke up in the middle of the night because of a noise. He opened his eyes and saw a dark silhouette of a big, four legged creature lit by the moon. It was hunching over his bag trying to rip it apart with its mouth. Clyde yelled and threw something at it. The creature jumped away and growled. Seeing that his method worked, Clyde began throwing anything he could grab off the ground and yelling at the creature to leave. It quickly caught on and ran away. Clyde watched it up until it disappeared completely and he couldn’t hear its footsteps on the garbage. He sighed shakily to catch his breath and felt around for his bag. Not caring about anything else, he hugged it and fell into nervous, easily disturbed sleep.

In the morning, it turned out the creature made a few tears in the bag and spilled the leftover beans all over it. Clyde scooped them out, ate them, drank some water and quickly headed out. He had to get as far away as possible in case the creature wanted to come back. He would react to every little sound, thinking it was the creature following him. He wondered if that’s what Aunt Lisa always felt. Must be terrible to live like that. As he walked, he scanned the ground for something to patch his bag up with, but needles and thread do not simply lie around and therefore, his hopeful searches didn’t lead to anything. He wished there was another crow he could talk to. Or, even better, someone to assist him. He heard stories of similar creatures sometimes appearing here and there. He was told they won’t attack if they see a group of people, but he was all alone. He was somewhat used to the homesick feeling at this point, but it wasn’t something pleasant.

At noon, he sat down for a break and began opening his second can. His ears caught the sound of some garbage shifting. He stopped rubbing the can and listened, holding his breath. Quietly, very quietly the creature stepped on a plastic wrapper, getting back to his hiding spot. It was enough to alarm its prey. Clyde stood up slowly, barely breathing out of fear, put the can in the bag and then sprinted as fast as he could away from the place. He could hear the creature behind him run down a garbage pile and chase after him. Clyde’s strength was running out and the creature was faster than him, he only had one choice- to turn around and fight. He saw a pipe sticking out of somewhere and grabbed it, turning around instantly and dropping the bag on the ground. The creature ran a few more meters and pounced on the boy. He jumped away, whacking it with his pipe and throwing the off balance. It didn’t land well, dragging its side along the ground, but that only angered it more. It got up and went for another pounce, but Clyde was ready for it and attacked with his pipe again. Before the creature had time to spin around, Clyde ran after it, hitting it again and again. His was a greater force to him than anything else. The creature was caught off guard and tried escaping like last night, but Clyde wouldn’t allow it to haunt him anymore. He continued hitting it, tears in his eyes and only one thought in his mind- to survive. After a while, the creature was motionless. Clyde’s spontaneous pipe swings slowed down until he dropped the pipe and collapsed to his knees, sobbing loudly, scared and confused. He looked at the grey fur of the creature, at its sharp teeth and pointy ears. As his mind calmed down, the first thing he was able to process was I killed it. He began wondering why the creature was alone, if it had children to feed. Maybe it was a mother? A sudden theory hit him. What if his mother was dead? What if this was a mother and he just killed it? Maybe she was just hunting for its children and now they will be raised by someone else and then go out to search for her…

The thoughts filled his head, his fear returned to him as he stumbled away from it, towards his bag. He felt sick looking at the corpse. With shaky hands, he picked up the bag and checked if his watch was still in his pocket. It didn’t fall out. He opened it and stood motionlessly, staring at the spinning gears. No one knows how much time has passed as he stood there, watching them, but it felt as if with each gear movement, he grew up a little. His mind became more mature, more accepting. He became more serious and his grey eyes seemed to get a little darker. The spark of childhood faded away from them.

He whispered, tightening his grip on the watch. He was sorting through all of his memories and all of them led up to one thing. His mother was probably dead. She couldn’t have gotten anywhere in this desert. Something happened…but what? He closed the watch and put it back into his pocket. He wasn’t on the journey to find his mother; He was on a journey to find out what happened to her.

The Corporal Active 1 week ago