Tales From The Digital Bunker 0 3 years ago 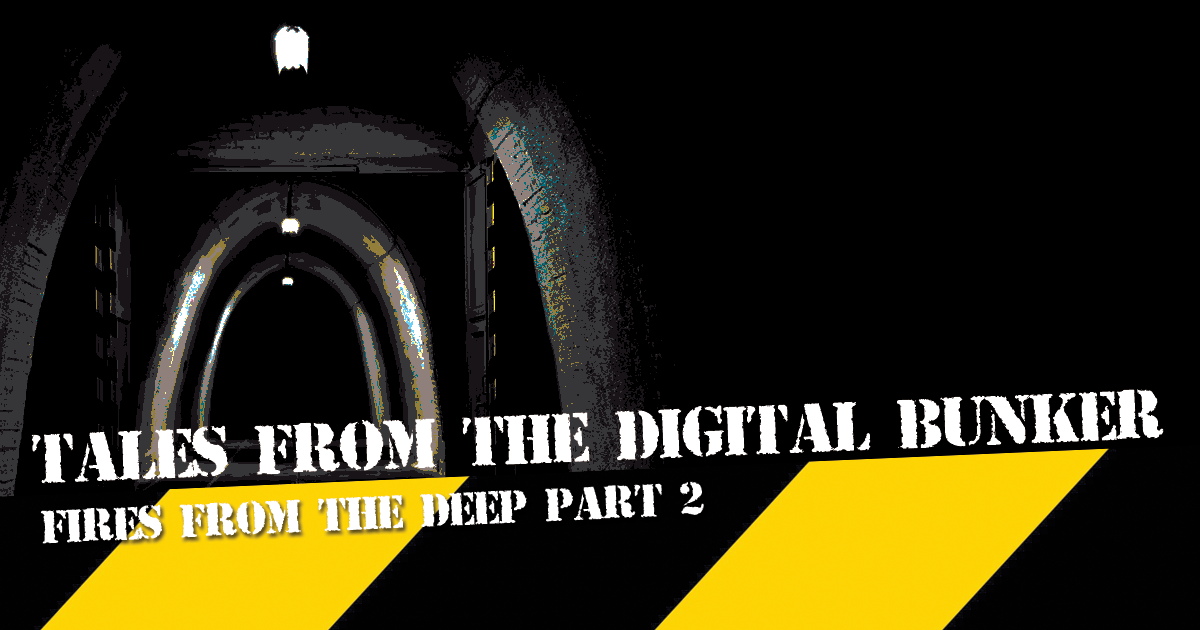 For the first part of this story, go back here

Down in the Unknown Basements several distinct species have emerged due to the unique circumstances in the area. The wild hamsters with their heightened intelligence, the adorable ghost puppies, the enigmatic puckwallower and the singing sponges, but none are so ferocious as the half-rats.

Half-rats, for those who have never heard of them (and count yourselves lucky), were the offspring of Satan’s own Bad Rodent Slash Fanfiction. And when I say bad, I mean really disgustingly horrible eye-watering badness. I’m talking worse than such works as ‘Twilight’, “50 Shades of Grey” or “Debby makes Doodoo”. Simply imagine a creature the size of a tennis ball, the strength of an alley cat and the disposition of a paranoid piranha suffering from withdrawal.

Human is not on the wild hamster menu. Human is on the half-rats menu though.

IMPORTANT: Do not mistake for hamsters.

The Toysoldier manual to the bunker (2016 ed. 2nd printing)

His muscles burned with the fires of exertion, ignited with the gasoline of desperation. The corridors slid past, blurring into an indistinct smear, his focus drilling a narrow tunnel, guiding him where he needed to go. He skidded around the corner, throwing his sizeable backside into the turn, making him slide like a drifting car. His tail, oscillating in the wind, trailed behind him like an insane streamer on methamphetamine.

Reaching the termination of his stamina, Great Big Turkey Leg, ragged breath escaping the small creature, skidded to a halt in front of the door he was trying to reach. Behind it was the one he was searching for. The one who knew the tunnels below. The one named Dermut.

If only he had used the time he ran to figure out how to open the towering gateway rising before him. Towering and quite closed.

He may, or may not, have issued a small hamster curse at that point. I’ll leave that to your imagination.

Dermut was working on his newest story (this story in fact, not that it is in any way relevant), when the little vent in the ceiling suddenly busted open and deposited a tired hamster on his desk, together with a couple of rather surprised spiders. The spiders scampered off quickly and had a bunch of adventures not recalled here, before settling down behind the stationary cupboard on level 14. This is not their story.

Great Big Turkey Leg shook himself off in order to remove some of the dust and cobwebs his fur had picked up during his headlong scramble through the vents. He was only partially successful, but he decided that was good enough.

Dermut sneezed vigorously as the hamster threw up a quickly expanding cloud of dust, misting his notebook in a thin layer of gray particles. Rapidly the hamster started squeaking, his tone high and insistent.

“What? A fire is raging down below” Dermut exclaimed in response. The conversation between the two continued with more squeaks.

“Death and destruction. Got it. I’ll grab my gear. And on the way you are going to give me all the information you have, including on how the dickens I am able to understand what you are saying.”

The pair used the old disservice entrance behind the boilers in sub-basement 2 to gain access to the unknown basements, the network of discarded realities that, after being deleted, archived or simply set adrift on the web, still clung to the bunkers virtual structure like barnacles on a ship. The route involved passing the gorge of misconception and the sanity shaking infinity promenade, but Dermut knew the paths through the gorge and that looking at your feet on the exterior walkway would not cause the infinite panorama to would suck your sanity out of your skull and use your sense of self-importance as a napkin. It did involve getting much too close to the lavender linen closet than Dermut was comfortable with, but it was the half-rat’s breeding season, which usually meant they were hungrier and more feral than usual. The half-rats were to be avoided at all cost.

They made it past the lavender linen closet without any tentacle related incident.

Deeper and deeper, they descended into the depths of the deepest of the unknown basements, and that is very deep indeed. The deeper they went, the more signs of devastation they encountered. Scorched walls, molten in some places, gave testament to the ferocity of their raging adversary. They followed the trail in silence u

Both were saddened by the sight. Nothing more than charred remains and ashes remained of this once proud (and to the ecosystems of the forgotten basements quite beneficial) culture of sentient fungi. Nothing more than the few young survivors hidden in the walls.

Great Big Turkey Leg slithered through the rat hole to make contact with the survivors while Dermut was left to lament the loss and contemplate the multitude of possible others the fire may have encountered while it raged.

Deep within the walls the survivors huddled. Again something was coming through the hole, possibly endangering the remnant of the colony further. The colony sang a collective sigh of relief when the snout of Big Old Turkey Leg appeared out the shadows, quickly followed by the rest of his compact hamster body.

At that the song grew a little stronger.

The trail of ash  and scorch marks was easy to follow. The terrain was less so.

The fire had been indiscriminate in it’s destruction. At one point it had raged through the tunnels known as the cable roots forest. Robotic Nanospiders were everywhere attempting to repair damage in the area to which the blue prints had long been forgotten by humans and Nanospider alike. It was said that the crystals in corridor XCDFGB-437-Q/4 still knew scraps of the forgotten lore, but they weren’t sharing.

They reached the burned tunnels, some seemingly moving backwards through time, where they were now suspiciously unburned, unlike everything else in the path of the fire.

And on they moved.

Further and further down the path of destruction. It wasn’t long after they had passed the pristine Spambot Waiting Lounge (although it felt like and eternal blink of an eye) that the air became noticeably hotter. They were gaining on it and as they approached Spambot Eviction Centre mk. 297, eroded by extensive use as all before it, that Dermut thought that it might be a good idea to have a plan…………..