You are here: Home / News / Tales From The Digital Bunker / T’was the night before Toymas

T’was the night before Toymas 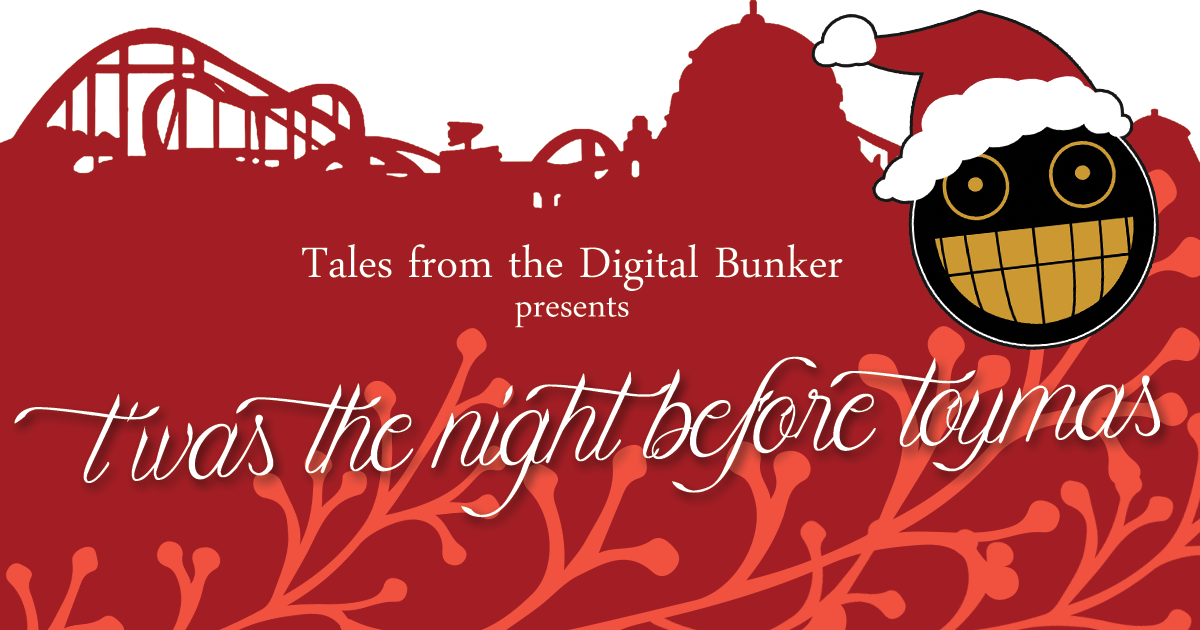 T’was the night before Toymas and the snow was drifting down gently, from clouds fluffy as cotton candy, onto the virtual forest. The virtual pines groaned under the weight of the thick layer accumulating on the branches. Below the roof the branches had formed, the forest bathed in a celestial silence usually reserved for temples and churches. A few Humbugs lazily hummed playfully through the trees, their massless bodies forming intricate patterns in the air.

Beyond the huge metal doors, deep inside the lone hill, all through the Digital Bunker, not a creature was stirring, not even a mouse. Now, as we all know, mices have long been driven out by the wild hamsters during the rodent wars of ‘03, but even if there were still mice left, trust me, they wouldn’t be stirring.

The only exceptions were the soldiers who were just traveling through to be with their families or had elected to stay because they had nowhere to go. Them and the robots… the robots were never silent.

At a closer look, I admit that there may have been quite some activity in the bunker, but less so than usual, is the point I’m trying to make, in my own clumsy way.

Pipes rumbled and fans wirled within the walls, giving off the background noise the bunker always emitted, but tonight there was a different sound mixed in with all the others, an extra sound as the PATS (the Pneumatic Assignment and Dispensal Service), the bunkers internal network of interdimensional pipes that was its mail system, was working overtime delivering Toymas cards and gifts to the correct places and times they were supposed to arrive at the timespace coordinates of their recipients. The soldiers remaining in the bunker were in good spirits, because who doesn’t like getting PETS? Even the servos on the robots seemed to wizz and whirl at a slightly jauntier tune.

Overall, spirits were high. It was good to know that there was a place to go, even if you had no place to go. There was even a lecture scheduled on how both states of existence could be true at the same time, but I missed it.

Not all of the bunker’s denizens were in such an elated mood, though. The Hot Dog Man was slaving away in his workshop, unaware of the date as usual, the hooverbots were getting pretty sick of the extreme excess of glitter (especially since the wednesday before was the Timmy-Hamster-Glitter-Breakout incident, that we are not allowed to comment on due to legal reasons, happened, but paper workshop 7 will be out of order for the foreseeable future) and, in anticipation of tomorrow’s feast, the waste disposal was thinking of unionizing, if only it could find someone to unionize with.

It had tried to talk to the vending machines about it, but they had declined. The waste disposal suspected they liked to have their buttons pushed. He next tried the fridges, but they too had given him the cold shoulder. The incinerators were to fiery and the hooverbots wouldn’t sit still long enough to formulate a plan.

Only the airconditioning whispered its sweet and fresh wisps of air to his electronic ears, so it listened. It listened and found something it had not expected. It found love.

Who would ever expected, that an appliance so mundane as the waste disposal system, could find such fulfillment in the presence of another, but it happened. The airconditioning whispered its sweet nothings, the waste disposal opened up and they embraced.

The soldiers first clue that there was something wrong was the rising smell of sewage. Those remaining, those with noses, quickly and orderly evacuated, many into the snow outside as the smell invaded every little corner of the bunker.

It was cold but joyful, this very special Toymas, out in the snow. Soldiers huddled together, keeping each other warm, exchanging the gifts delivered via PATS. The snowman contest was legendary that year.

But that was the year that The Stench almost stole Toymas. Almost….

Editor’s note: As soon as they could be made ready, a team consisting of technicians and members of GAS went in to rectify the problem. When they found out what happened, they could not, in all good conscious, seperate the two lovers. So, they shunted them in a parallel dimension, (where they still operate in relative love and peace, as far as we know,) before installing new appliances. It took 4 days for the smell to clear.
The parallel dimension is on display in a jar in the toy soldier museum on level 8, 9 and 11, subsection b, in case you want to check how they’re doing.