Tales From The Digital Bunker: The Salesman Part 1 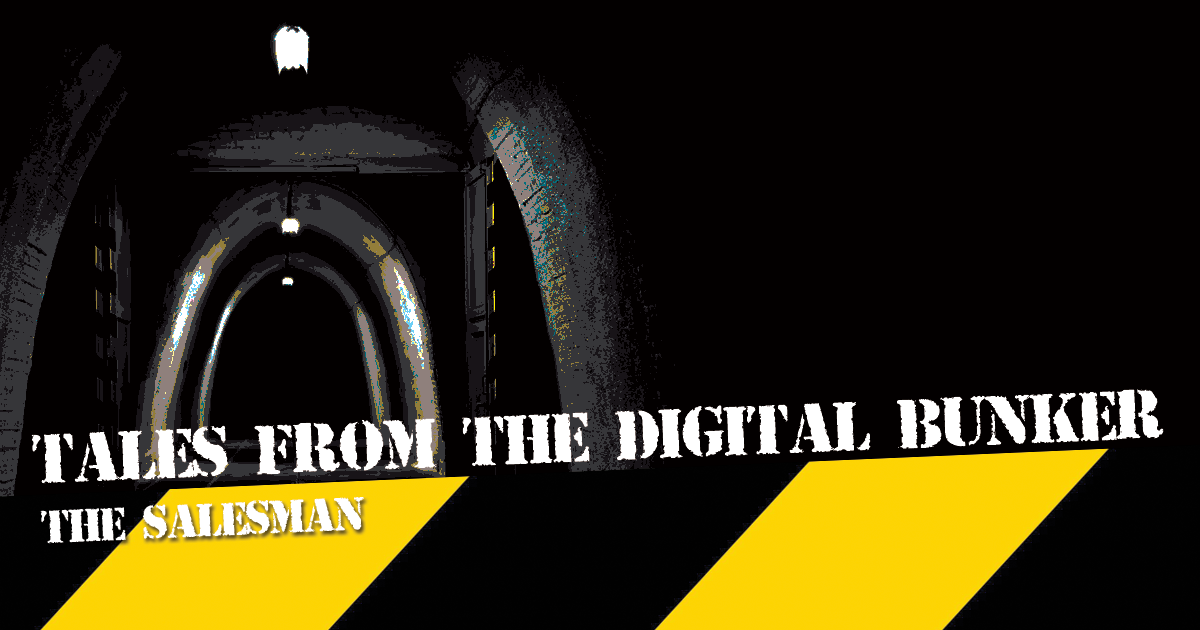 The greatest book about selling customers an alternative to their current electricity provider is “The Art of War” by Sun Tzu. Coincidentally enough it was also the greatest book about selling automobiles, mortgages, personal lines of credit, life insurance, and cupcakes. At least that’s what the Salesman’s mentor had told him. The Salesman kept a copy of the book in his briefcase along with copies of Jocko Willink’s “Extreme Ownership”, Gary Vaynerchuk’s “Crushing It!” and “Inky” by Inky Johnson. These were all sacred tomes for any would-be salesman and entrepreneur. At least that’s what the Salesman’s mentor told him through tobacco heavy breath.

“Listen, kid, these books here? These pages are bleeding magic! Anytime you’re feeling down or that you’re a failure, I want you to crack one of these books open.”

So far, the Salesman had made it halfway through each of them before deciding that he needed a break from all the uplifting positivity and motivation. One book extolled the virtue of not being afraid to fail, another told him to plan corrective action like a Navy SEAL, and another told him to rebound from his tragedies with optimism… and it was just beginning to be too much. He had found that each, while well-intentioned, weren’t really helping him with his current predicament. The Salesman had been walking door to door for weeks and so far no one wanted to talk to him about their current energy plan.

The Salesman’s feet hurt as he continued walking in his leather Monk Strap shoes and his tan suit was clinging to his body from sweat. The sun was hanging high above his head and the humidity this time of year was reminiscent of being inside an indoor swimming pool. So far that morning he had four doors slammed in his face, two threats of physical violence, and one lonely old woman who thought he was her son finally coming to visit her. While he still wasn’t able to convince the woman from changing her electric provider, at least his belly was now full of lemon tea and digestive biscuits.

A hot wind blew across the Salesman’s face which forced him to close his eyes as he felt sand get kicked up into it. When he opened his eyes, however, everything looked different from what it did a few moments ago. Where once the circular end of a cul-de-sac stood was now a vast, empty desert. The Salesman removed his brown fedora and wiped the sweat from his forehead with his jacket sleeve. He turned around to make sure he hadn’t taken some Bugs Bunny-esque wrong turn but the street he had been walking on had been replaced by the same desert.

The whipping wind of the desert didn’t answer him. With little in the way of choice, the Salesman trudged on into the unknown with his motivational/inspirational literature filled briefcase. The Salesman stumbled and staggered through loose tan desert sand with a body that threatened to collapse under fatigue with each step. If he had thought the heat was oppressive before then the desert sun was an entirely different beast. He was sweating out all the moisture in his body and, if he didn’t find relief soon, the sun would cook him alive. He held his briefcase over his head to create at least a little shade to shield his face.

“Ah an offering to the Briefcase Gods… I can dig it.”

The Salesman turned his head to see a young man wearing a black and yellow military uniform in circular glasses looking back at him. What was even more alarming was the large hangar that was sitting behind the man. Where had that come from? Was that a mirage?

His arms fell to his sides as he stared in disbelief at the hangar and the man standing in front of it. The structure was massive from the outside… how on Earth had he not seen it? He recognized none of the markings on the man’s uniform. He also didn’t appear bothered by the heat in the heavy material of his uniform or the knit cap that sat on the back of his shaved head.

“I’m… uh… are you interested in switching your electricity provider?”

The Salesman wasn’t sure why he had jumped right into the sales pitch instead of asking something a little more sensible like “where the heck am I” or at least “do you have any water?” The young man in the military uniform cocked an eyebrow at the question as he robbed his chin.

“Yeah… the hamsters and I have not been seeing eye to eye lately. Follow me inside and I’ll see if any of the others are available to speak with you.”

The military man spun on his heels and walked through the sand dunes towards the base without answering. Ecstatic about his first interested customer, the Salesman practically tripped over himself as he rushed to follow behind. That hangar must use a lot of electricity. The Salesman felt his luck changing for the better.. But did he say something about hamsters? No matter. It would be nice to get out of the sun and maybe figure out how he ended up out here.

The closer they moved to the hangar the more impressive the structure became. A small rectangular outcrop stood out from the wall of the hangar. The young man pulled a yellow identification card from his wallet and tapped it against the rectangle which beeped in response. The Salesman saw a photo of the man accompanied by the words “Toy Soldier.” There was a hiss of pistons as the large hangar doors spread open.

“I’m Private Six, by the way. It’s very rude that you didn’t introduce yourself.”

“I’m sorry. I’ve been wandering out here in the desert for hours. My name is -”

“This looks like a desert to you? That’s fascinating.”

The Salesman’s brow furrowed. What did he mean by that? He followed Pvt Six into the structure with his briefcase in hand. The sight of an automaton looking right back at him immediately overwhelmed him. The metal being’s glowing red eyes locked with his which made his permanent toothy smile that much more creepy. Slowly, the robot turned and walked away leaving the Salesman terrified.

“What is this place?”

All around him, men and women were hard at work with various soldering irons and wrenches as they repaired robots similar to the one that just approached him. A giant piece of technology that looked like a server of some variety sat in the far wall of the large empty hangar next to a door that read “Admin.” The Salesman felt Pvt Six step beside him and put an arm on his shoulder.

“Welcome to the Digital Bunker. So… what were you selling again?”