Tales From The Digital Bunker: Fires in the Deep Part 1 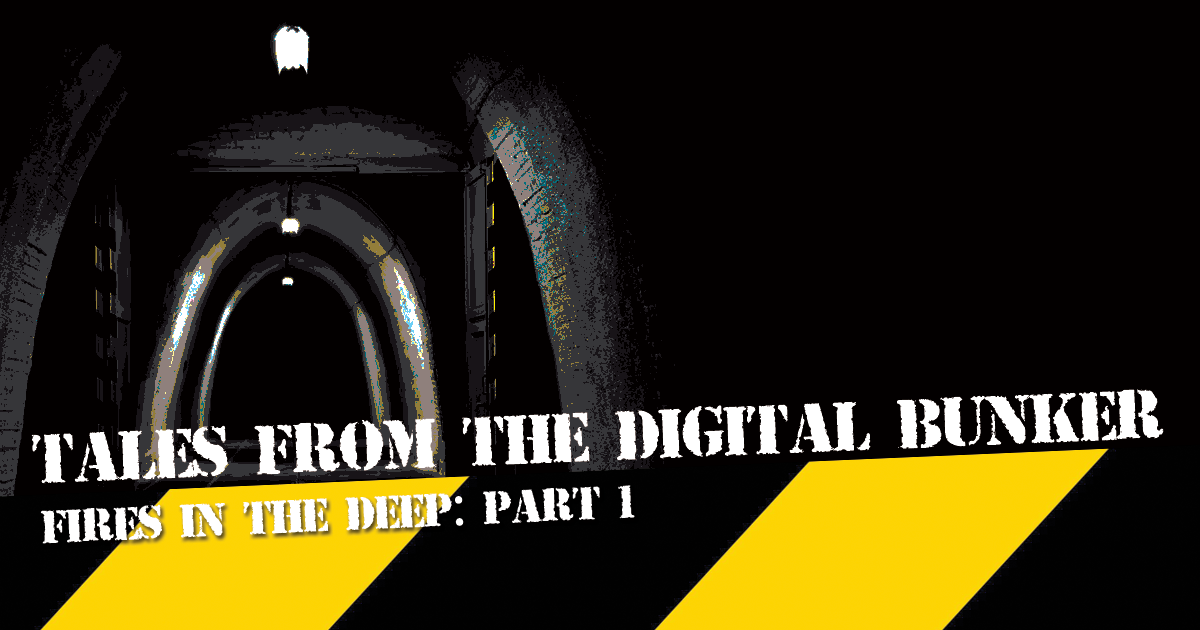 Fires In The Deep 1

Re: The Unknown Basement; what everybody knows (or should know)

Deep below the bunker, beyond the known basements where laundries and storerooms bustled with activity, the trash collectors collected and the custodial services had their closets, beyond even the production facility of the hotdog man, lie the unknown basements, a forgotten network of tunnels, labs and workshops, long ago abandoned when the first of the Virtual Reality Generators melted down.

There are three VRG’s down in the depths of the bunker, all malfunctioning and spewing out virtual reality warping the space around them into hypothetical and often toxic terrains. Anything could happen down here. Direction, gravity, time and logic did not naturally behave according to the more commonly agreed upon rules for these physical forces.

When the first Virtual Reality Generator had come online, it had melted down almost immediately. They had bricked it up, jettisoned it into cyberspace and had started again, building a second, better one. When the second one malfunctioned they abandoned the project all together. The third one is commonly believed to be the first one, but 3.14 minutes in the future. As far as the space-time distortions were concerned, the last one is by far the most troublesome of the three.

The project had led to the Virtual Reality Stabilizer, the device which held the bunker together as it was at present. But this story isn’t about that device, but it is about those long lost tunnels, places where the laws of reality shrug their shoulders and just give up making sense until they could unload on their therapist’s couch.

The Toysoldier manual to the bunker (2016 ed. 2nd printing)

Green-Glow-on-Moisture was tending to the spores, looking up from the arid soil that had been pushed through the tiles of the hallway during the great flood which had flooded the hall with a layer of 3 inches of water, nearly as high as the top of Green-Glow-on-Moisture’s cap.

He vaguely remembered the event himself, being only a sporeling himself at the time, but the songs of the elders recounted it often. Many of the colony had been lost to the flooding waters, but the sediment it had left been left behind had been fertile and the tribe had exploded.

Over the generations the moisture had evaporated leaving the soil desiccated. The spores overhead would soon descend onto the soil and drain it of the last of its waters as they sprouted into the newest members of the colony. When they were able it would be time to move, to seek more fertile pastures.

There was a disturbance in the air. That was how it started. Green-Glow-on-Moisture was instantly aware something was wrong. He was a seasoned sporeherder, 5 generations now had seeded under his care, and nothing like this had ever happened. The unexpected usually meant trouble. He quickly called the spores to him with the song of returning. Then the wind came, sudden and strong, it nearly blew him over.

On the wall some of the elders stirred in their immobility and one even awakened from the elder sleep for long enough to throw Green-Glow-on-Moisture a questioning look. He never saw it as he stared down the corridor from where the sudden wind had originated. He then saw the glow at the end of the tunnel, the glow that clawed closer and closer, raging like an angry beast in the throws of rabies.

Quick as lightning Green-Glow-on-Moisture gathered up as many of the spores he could find and fled to the safety of the old disused rat hole the colony had grown around. It had gathered the survivors of the flood, he hoped it would provide equal safety against the raging fire streaking towards the colony. He waited as long as he could for others of the colony but as the fire stampeded closer, he was forced to lower the ceramic tile that functioned as an emergency door, closing off the entrance.

It had barely slipped into place as the fire roared past, ravenous and unstoppable. Green-Glow-on-Moisture heard the songs of death, the sonorous song of the smoking and igniting elders, stationary in the eldersleep, the wailing song of his fellow herders as they were consumed and the sad simple melodies of sporelings caught outside. When the song finally died he wept, singing the song of loss, his sobs overpowered by the roar of flame and the crisp snapping of burned ground cooling when it had past.

A few members of the colony had been able to get to the shelter and he saved several of the spores under his charge. There was enough to rebuild the colony. Soon the great trek would start, there was no time now to wait till the sporelings had germinated. There was most likely nothing left to germinate in but the ashes of the elders.

There was a rumbling at the other end of the tunnel. For a moment Green-Glow-on-Moisture feared it may have been the rat, or the descendents there off, that had returned to the lair as two black beady eyes towered over the few bedraggled survivors. Then the small stubby nose of a hamster became visible.

Great Big Turkey Leg was a great explorer, or so he called himself at least, of the Unknown Basements. A member of standing, or at least sitting up in a cute and vaguely anthropomorphic way, of the proud clans of the free hamsters, he had seen the fire and taken shelter himself in another part of the basements. He had tried to follow it and then stumbled, quite accidentally and, lucky for the survivors, only metaphorically, across the group of survivors.

A tiny mushroom-man (although they prefer Mushroom-person of Fungoid, but hamsters are unfortunately not know for their strict observance to political correctness) stepped forward and Great Big Turkey Leg sniffed it once or twice. The fungoid began it’s song (a curious way of communicating that consisted of certain scents that conjured images and their meaning directly to the brain and was called “the song” because it had a musical feel to it. In no shape, way or form had it anything to do with sound) and Great Big Turkey Leg immediately understood its meaning, it’s sorrow and it’s urgency.

The exchange only lasted a moment and Great big Turkey Leg knew what he had to do. This was not something the small inhabitants of the Unknown Basements could handle alone, they needed help and they needed him to go and get it. They needed the large one from above, the one in black and yellow head to foot, the one that called himself Dermut.

Great Big turkey leg ran like the wind, faster even, though the passages that only the wild hamsters know. He had to outrun a raging fire. He knew it could be done. If he moved smart and trusted his instinkt he could skirt the areas where time didn’t quite worked like it did upstairs, where sometimes it ran slower, sometimes faster and sometimes even backwards. He could make it. His little hamster muscles burned by with the strain of the run. Burned like the fire deep below that still raged onward.

Then he saw it, the end of the tunnel he was running through. The end shone with a cold white light, the light originating from the light tubes that were in the corridors above. He was so close. Whit a final boost of speed he ran out of the tunnel and barreled headlong into corridor 32b.

He had made it into the bunker.