Tales From The Digital Bunker: Welcome to the Bunker! 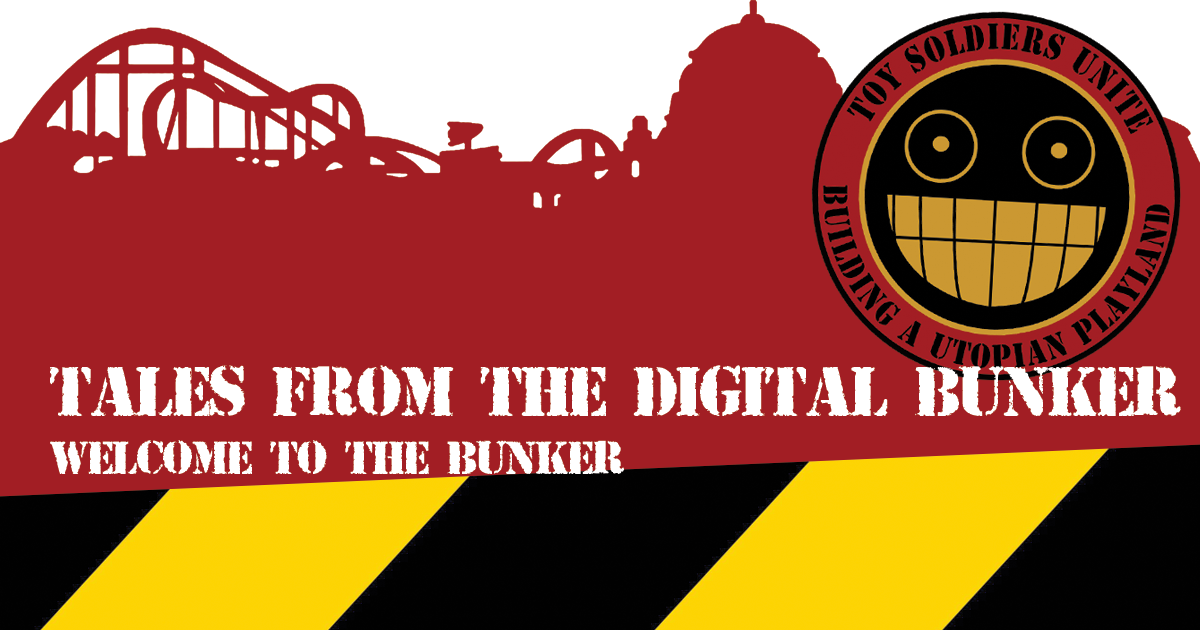 Hi there! It’s me, Lt. Sophie. I’m here to welcome you to the Digital Bunker of TSU, and to show you around a little. I see you’re new, so I will try not to overwhelm you. But there’s a lot to see, I can tell you that!

At least you came in through the main entrance, that makes things so much easier and less messy. Here, have a cookie and strap on your hiking boots, cause it’s gonna be quite a walk.

This is floor Zero. People usually arrive here. However they do it, I don’t know. I’ve been here so long I can’t even tell how I got here anymore. But I assume everybody has their own way of finding us. You’ll notice this floor looks more like a hangar than anything. That’s because it’s closest to “The Surface”. Of course, being a digital world, there is no actual surface anywhere, but it’s closest to the physical world and where we usually leave from if we have to go outside. The hamsters don’t like it much here, they prefer the cosier quarters below. Over there is the maintenance area for our robots. We’re currently trying to implement a self-repair station, but… well, it’s not working yet, you know?
There’s also the Admin HQ over there. That’s where Engineer Airhead does most of his magic, and tries to keep things running. Sometimes that even works.
Our central computing system, Q.V.R.E.S.S., is in there too. We’re all not sure what exactly it does, but Airhead is trying to figure it out.
Right, let’s go down to the quarters, shall we? There’s an elevator right here. Of course there are stairs for those that like to keep it sporty, but you never know where exactly you’ll end up using the staircase. It seems a little glitchy.

There we are, floor One! Already looks a lot more like home, doesn’t it? This is the community area. Here, you can sit down and chill, over there’s a corner for our engineers and anyone interested to fiddle with stuff. We also have a big kitchen over there, and the Mess Hall is right through that door. We’re still trying to program a bunch of robots to cook for us, but apart from a few explosions and some very burned meals we haven’t really achieved anything yet. So you may have to take care of your own meals, or join a bunch of others to cook with.
On this floor, you’ll find most of the things you’ll need to be creative. We have a bunch of people working on a studio to play and record music in right now, if you wanna know more just ask Dr. Malice. There’s also some workshops for painting, sculpting, sewing and some other stuff. We’re even trying to build our own Youtube Space, and I think a few of us are attempting to build a forge in one of those as well. If you need any material or have general questions that involve art or these workshops, just let me know. Oh, and that door over there, that’s the library. That’s where WRITE sits most of the time, feeding their imagination and working on their latest novel or poem. Please, remember to be quiet in there. Our librarian is not the most patient and has very sharp teeth.
That lab door over there leads to the quarters of T.S.O.S.D., where they work on their various space projects. I think last time they tried to send a hamster into space. Wonder how that worked out…
And last but not least, we all have to stay in shape, so we turned that room over there into a little gym. It’s not the fanciest, but it does the job, and we programmed one of the robots to motivate you by constantly throwing insults at you. Pretty clever, eh? The community showers are right next to it.

Right, back into the elevator and onto the next floor! Floor Two has a bunch of dorms and guest rooms. See all those corridors? Each of them leads to about a dozen rooms and a few apartments for those who live here with their entire family. There are more smaller rooms on the floors below, but we haven’t renovated all of them yet. Even with the help of the robots it’s a tedious task. This bunker seems surprisingly old, considering it only exists in the digital world, and we try to make it as homey as possible. Each floor also has a smaller community room for group activities, a laundry room and a maintenance room. Each floor also seems to have some sort of secret to it. Corridors we haven’t explored yet, rooms that pop in and out of existence, all kinds of weird things. We think there are some bugs in the system that cause these issues. You’ll also find the hamsters are quite active around here, I hope you don’t mind.
The community rooms all come with coffee machines and kettles and small refrigerators. But some of our rooms and apartments are big enough for their own little kitchen. Right now we’re far from full, so you can choose whichever you prefer! But you should probably stay away from the lower levels for now. We still haven’t explored the whole Bunker, you know, and sometimes there are… weird things happening. Other soldiers reported strange noises and hamsters behaving erratically. There’s been talk about the Hotdog Man, which the HQ can neither deny nor confirm.
There are one or two special things about floor Two. If you look over there, that’s the door to our medical bay. If a hamster bites you or you get sick, or if you just want to take part in some medical experiments, that’s where you need to go. Our nurses work there around the clock to keep everyone healthy. Mostly. The room right next to it, by the way, is Raptor’s. We had to move him here because he was a constant visitor to the medical bay anyway, and we didn’t want to put him through the hassle of going up and down with the elevator each time.

Right, do you want to take a look at our vacant rooms? Let’s go deeper into the Bunker then…