You are here: Home / News / Tales From The Digital Bunker / The Screwdriver Maniac

Tales From The Digital Bunker 2 6 years ago 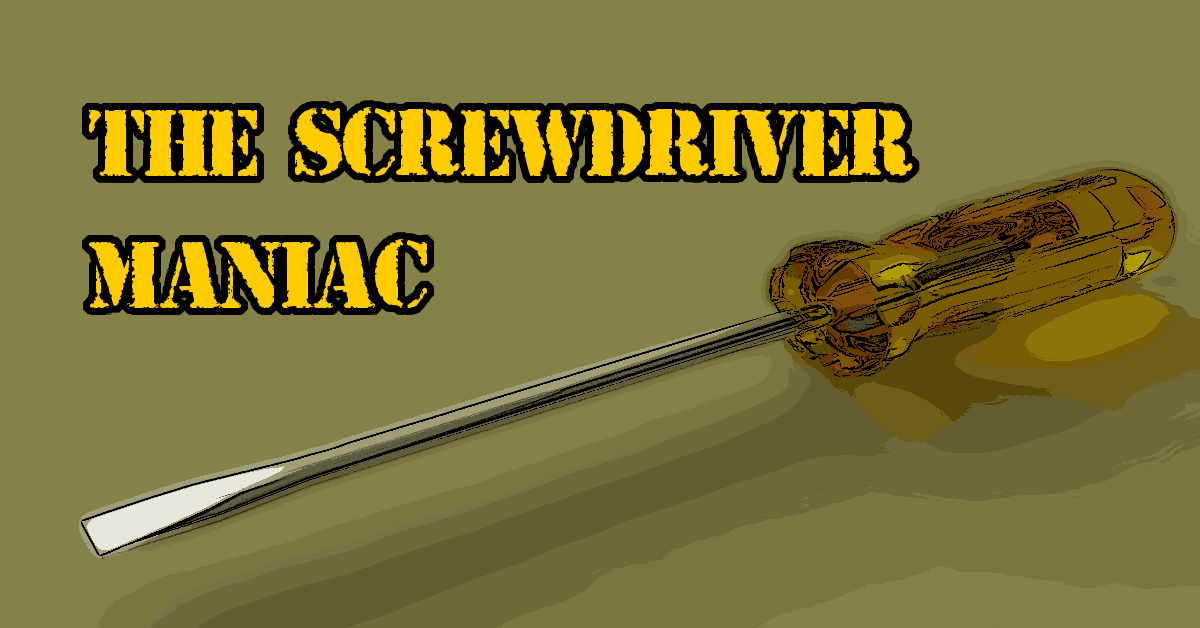 Keeping the Digital Bunker in a state of maximum operational effectiveness requires far more resources to be at our disposal than we currently have. So awhile back it was decided that the best state we could hope for was “It’ll do for now.”. This is certainly not an indictment of those Toy Soldiers who help where they can, sealing broken pipes, relaying cables, and the bravest of all, willing comrades with plumbing skills (I ensure they receive extra rum rations as a thank you).

The problem is the Bunker is old. Extremely so, and over the years various groups have made use of it before we turned up. I’ve found documents belonging to several 3-letter agencies whose existence have always been denied, plans for tunnels signed by Victorian era men in stovepipe hats, and on occasion I still stumble upon ancient arrowheads in the furthest reaches of the bunker. All in all, I wouldn’t dare put a number on the age of the bunker, but it does mean those robots assigned to maintenance are at it full time.

So when I’m in the mess hall grabbing some grub before scurrying back to my office, the last thing I want to hear is rumours of some supposed ‘Screwdriver Maniac’ going about undoing our work.

“Guard rails on my bunk bed fell off. Landed in my pile of dirty washing though.”

“Three of my experiments exploded because the pressure chamber had been unscrewed.”

Before I even heard another, the table and bench a group of soldiers were eating at collapsed, throwing food everywhere. A screw unceremoniously rolled to a stop at my boot.

“Right, I’m issuing a general order. Anyone whose current mission or project is below level 3 priority, is reassigned to find this damned screwdriver maniac!” The blank stares that greeted me were disconcerting until the penny dropped. “YES! You can take your lunch with you!” The mess hall emptied in an instant, soldiers always glad to get out their Nerf guns to hunt someone down.

Considering that health and safety standards of the Digital Bunker were slipping rapidly, I opted to take the long route back to HQ via the stairwells, careful not to exert any pressure on the hand rails. By the time I reached HQ and finished my chicken mayo sandwich salvaged from the mess hall, I was greeted by half a dozen of our robots standing at their consoles, directing queries, filing reports, and monitoring some of the camera’s throughout the bunker. “Alright. What’s the damage?” I asked, taking my place at the back of the HQ and tapping in my login codes. One by one the robots spoke up, coat racks dismantled on level 15, desks falling apart in the WRITE Spec Ops Division, and arcades collapsing in the break rooms.

“And a secondary engine has fallen off the airship docked in hanger H.” Chimed in another robot.

“That’s Keptin Sari’s ship. She’s been ignoring the mandatory maintenance schedule for years now.” Dismissing it I walked over to the bank of monitors systemically switching between cameras within the bunker. What had originally been planned as an army wide manhunt for a singular individual had devolved into a Nerf battle between Toy Soldiers. It couldn’t be helped. Having fun comes naturally to any Toy Soldier, no matter the situation or crisis.

“Unidentifiable individual on level 18, sector 4.” The camera zoomed in on a figure making its way down a hallway, pausing at doors and panels briefly, before moving on again.

“Gotcha!” If it was a robot, its head would end up mounted on my desk as a fishbowl. If it was a soldier, they were going to end up on plumbing duty for the next 6 months. And then the thought occurred to me, what if it was neither? What if we had a genuine intruder in the Digital Bunker? If they were intentionally sabotaging the Bunker and the Army of Toy Soldiers, it would mean there was an enemy, individuals intent on preventing us on our mission of creativity, imagination and world domination with giant frigging robots.

After having unlocked my banhammer from the armory in TSU-HQ, I made my way down to level 18. As I walked to the halls and corridors, a few Toy Soldiers began to follow. Morbid curiosity for if Dutch has gotten the banhammer out, it meant someone was going to be digital disintegrated from the bunker and booted back into meatspace. Always a sight to behold. I reached sector 4, a hydroponics area built to grow the ingredients for our infamous mind-control cookies. Already some ceiling lights had collapsed, and I could see hamsters using donuts as buoyancy aids swimming in the water tanks. I flicked the radio at my chest to contact TSU-HQ and get a report.

“Good. Seal the blast doors.” Immediately the sound of gears and hydraulics could be heard as the blast doors that separate each sector from the other closed. All except one. “He’s planned ahead.” I ran up to the blast door and as expected, the internals of the door mechanism had been loosened, and hydraulic liquid was leaking onto the concrete floor.

One of the scouts with the curious mob that had followed me ran over. “Dutch, Sector 5 is supposed to be under quarantine. Biochemical hazard.”

I paused to consider this. Neither robots or toy soldiers would go into a biochemical hazard quarantine. Both would probably melt into a puddle from whatever happened. Then a second thought occurred. “Why on earth do we have food production stationed next to a biochemical hazard?” No one could answer. Sometimes the Bunker liked to move things around without rhyme nor reason.

“Nevermind. Seal up the blast door, and make sure every adjacent sector is sealed up as well.” A group of Toy Soldiers broke off from the mob that had formed to carry out the tasks, while the rest milled about tidying up the mess the Screwdriver Maniac had caused.

To say I wasn’t happy would’ve been an understatement. Certainly I wasn’t going to delve into a quarantined sector, specially with a biochemical hazard, but it still bugged me that I couldn’t solve this case. It was going to gnaw at the back of my mind for a while, which frustrated me even further.

Waiting at the blast door to Sector 5, a team from the Engineers regiment arrived. I noticed one of them was equipped with a hazard suit and I questioned him. He knew the nature of the biochemical hazard in Sector 5, and it hadn’t been as bad as I imagined. Within moments I’d put the hazard suit on, grabbed my banhammer and made my way through the blast door.

Sector 5 was an absolute mess. Chemical vats had been tipped over, and treatment machines lay in pieces. Shelving racks that reached the ceiling originally lay scattered on the ground, with whatever they were storing equally dispersed like a collapsed house of cards. The lights were low or flickering, and through the hazard suit I couldn’t make out much.

Somewhere I heard the distinct sound of screws dropping on the ground, and I gripped my hammer firmly.

I turned a corner and there stood someone, something, with its back towards me. I could make out its vague humanoid shape but still couldn’t tell if it was robot or human. Just that they were unscrewing something in front of them. When I saw what it was, I instinctively took a few steps backs.

“I recommend putting the screwdriver down, and stepping away from the chemical disposal unit. Immediately.” No idea if they heard me through the suit, but if they did, they chose to ignore me and continue removing screws. “PUT THE SCREWDRIVER DOWN AND STEP AWAY FROM THE UNIT!” I shouted. They paused. I think it turned its head slightly to look over its shoulder for a moment, but they returned to the task at hand and continued.

In all but a few seconds it was over. The chemical disposal unit had been full, and once one of the seals had been sufficiently weakened, the pressurized acidic cocktail within burst forth onto the Screwdriver Maniac. Even though I was standing a safe distance away, and the metal grated floor allowed the chemical slurry to flow away elsewhere, I could feel the heat of metal and biologics melting. Yet I didn’t hear a thing but the liquid flowing. No screams. No malfunctioning noises from internal speakers. Nothing.

By the time the disposal unit had emptied itself, there was no sign of the Screwdriver Maniac. Just a pool of acidic liquid with some unidentifiable remains of whatever had been standing before the unit a moment earlier.

Two hours later I was back in my office in TSU-HQ with a bottle of rum. Sector 5 had been sealed up and added to the long list of areas to be cleared and renovated, though it was unlikely that was going to be done any time soon. And I’d been right. Not knowing the identity of the Screwdriver Maniac was gnawing at the back of my mind. Knowing that there was little danger anymore of sabotage was some comfort, as was having all Toy Soldiers and Robots accounted for. It had to have been an external intruder after all.

my assignment help Active 7 hours ago

The Gnome Shop Active 1 day ago