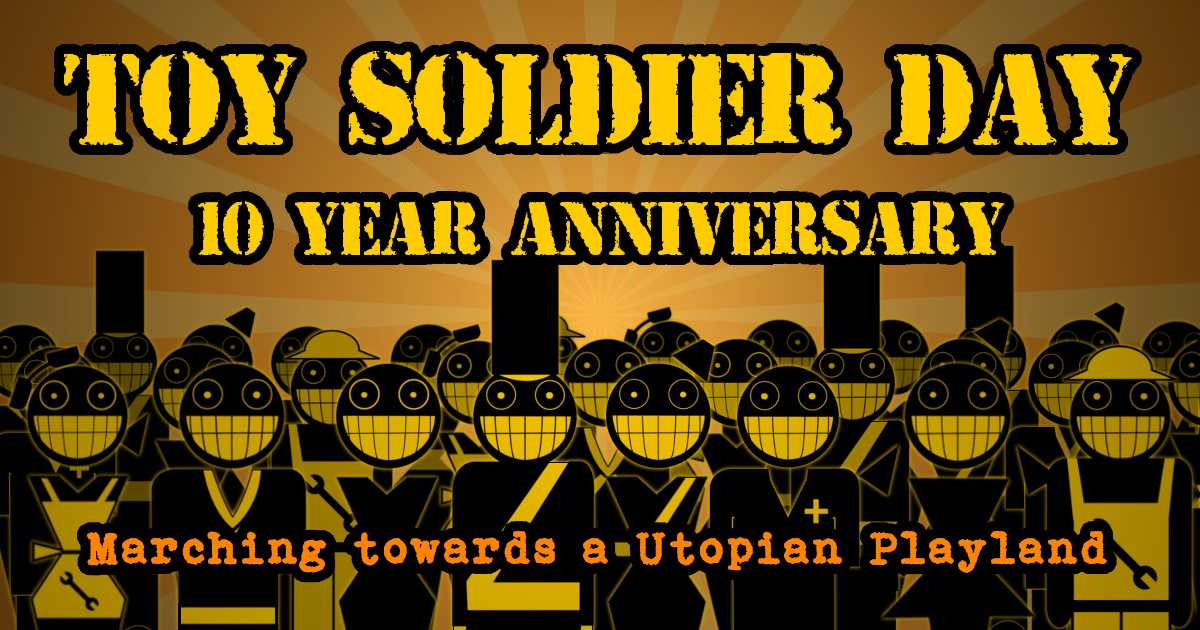 On this day 10 years ago Toy Soldiers Unite was founded and the Army of Toy Soldiers moved into the Digital Bunker, our home and base of operations from where we strike out upon the globe, invading, infiltrating and brainwashing the masses in our mission to make over the world, and create a Utopian Playland.

The Utopian Playland might be an actual place, a state of mind, or your own reality. One thing that’s for certain is that it’s all about creativity and imagination. Embracing the passions within yourself, and pursuing happiness with absolute abandon. Art, music, engineering, writing, science, games, and anything else where you feel your heart swell and your mind rage like a thunderstorm of ingenuity.

The past decade has been a rollercoaster of ups and downs. We went independent 5 years ago when our former ‘man with the plan’ decided to hang up their labcoat, but do not think for a single moment that has lessened the impact of the Army of Toy Soldiers. We have achieved so much over the past few years, supporting fellow artists and fundraising for charities that share our goal of making the world a better place.

And the imagination has been streaming from Toy Soldiers, like a tsunami of unbridled potential. We’ve had to resort to creating a record label to manage the fantastic music produced, and the podcasts recorded, by men, women and robots who express themselves in the best way they know how. Our special operations division of writers have recorded tales of the extraordinary, detailing life within the Digital Bunker. And then there’s the Gaming Marathon, which started out as an attempt to go 48 hours without sleep playing Minecraft to raise money, to a full blown invasion of the digital realms with streams from a whole squad of Toy Soldiers.

The community known as the Army of Toy Soldiers has blossomed like a glowing cloud of radiation, and I for one could not be prouder. Toy Soldiers have helped each other in the most dire of circumstances, inspired each other by throwing fuel on the fire of their passions, and relationships have formed more impervious than the strongest of chains. There is not a single one of you I am not honored to call comrade and friend, and Commander JET and myself truly hope you continue march forth upon the world with us.

Now I know that there are gatherings of Toy Soldiers in Disneyland L.A., and the Namco Arcade in London, but do not despair if you can’t make it to a meet up with other Toy Soldiers. It’s the 21st century after all and we have an entire virtual world at our disposal where distance is not even a factor. Post in the forums, or gab away in the livechat. And finally the answer to the question asked most frequently, what do we do on Toy Soldier Day?

With all that said and done, I’d like to leave you with this revival of an old song, produced by the talented Dr. Malice. Enjoy!