You are here: Home / News / News, Tales From The Digital Bunker / The Mechanical Debacle [Part 2]

News, Tales From The Digital Bunker 1 8 years ago 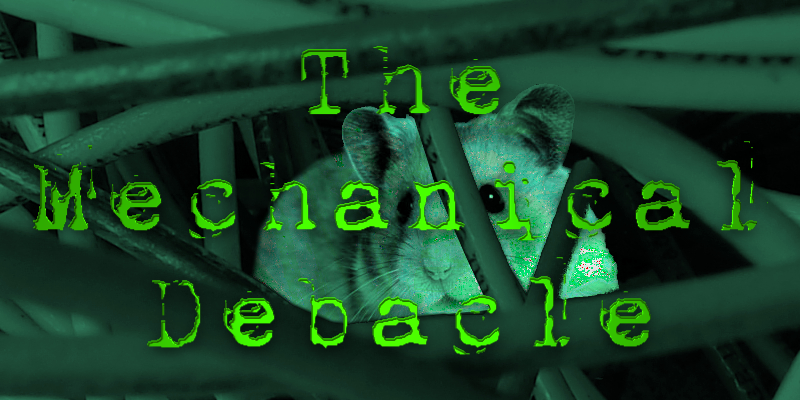 I put the hamster on the workbench, which had become a bit of a mess in the last few weeks. It was piling up with all kinds of designs, sketches, electronics, defective devices etc. The hamster ran off and scurried through the rubble.
I tried to catch it but it managed to evade me until it reached the HTD [Hamster Translation Device] and began squeaking.

I picked up the device I had acquired a few weeks ago when the hamsters tried to hijack a non-functioning rocket. I suspected the hamster to be “King” George, who else could it be? I had to be careful not to give him access to my machines, or the terminal network, too big a risk after what happened last time…

I plugged the HTD into the stand-alone terminal I use for testing, and put it on the little fella’s head. As soon as the device was turned on, a message appeared on the screen:

“This is King George of the hamsters, we order you to come to our aid!”
“I don’t take orders from hamsters,” I said, “but you may start by explaining those cybernetic hind legs.”

George squeaked as if I offended him, but started explaining:
“It was one of the robots we reprogrammed for our purposes. He was functioning fine initially, but it went wrong when we were running our regular -scurry and hide- drills…”

I looked at the hamster, as no more words appeared on the screen. He seemed to be sobbing or washing himself?
“And?” I asked.

“Well, the robot who was timing our drill decided we weren’t fast enough…”
The hamster paused for a second.
“Then he started grabbing some equipment that was lying around in our lair, picked me up, removed my legs and attached these!”

“How does it feel to be the first cyborg hamster?” I asked, but the hamster was not amused.

George continued: “After it did this, he went on to chase the others and… and… did… gruesome… things…”

He started what I assume to be sobbing again, can hamsters even feel emotions?

“FOLLOW ME,” appeared on the terminal screen and the hamster shook off the HTD and ran off through the door.

I guess I have no choice but to follow him.