Tales From The Digital Bunker 0 8 years ago 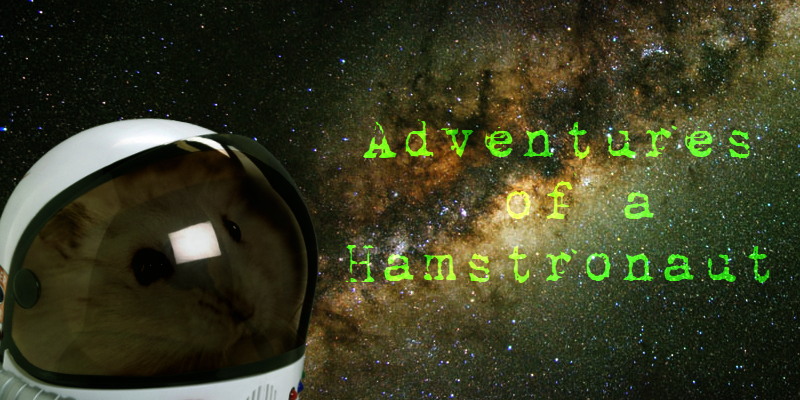 Scruffy had never been on a big assignment before.
He thought of himself as a brave hamster, doing his hamster things, gather supplies and working his shift at the wheels of the Digital Bunker’s power generator. Nothing extraordinary ever happened to him. He was just 8 months old, grew up in a normal but crowded hamster family. All was well for Scruffy until that one day, that day he glimpsed at a propaganda poster encouraging hamsters to join the T.S.O.S.D. for Hamstronaut training.

Scruffy had never felt like an adventurer, however he often climbed up one of the bunker’s little entryways to admire the night sky. He could name his fair share of constellations. His favourite spot was quite a climb, but what a view! All the way up on the roof, a safe caged air-vent no worries about predators, and a perfect 360º vision, barely obstructed.  Sometimes an arguing married couple seems to climb up there. Scruffy had seen it happen once. A guy that was illuminating what seemed like the whole roof with his uniform got thrown off. Down to the ground. “Humans are weird.” Scruffy thought.

Hamstronaut training sounded appealing, even if Scruffy didn’t become one to test the T.S.O.S.D. Up-Goers, the education it provided could put him in a position within the Directorate and land himself a nice salary. Scruffy signed up and passed most the subjects with flying colours. He had a little trouble with applied mathematics, but cleared the course with acceptable grades. Scruffy graduated with high praise and was signed up to the Hamstronaut program.

Scruffy is now in the waiting room, right before his first training mission starts. The nerves are starting to get to him. “What if my body can’t take the stress?” Scruffy wondered, “What if one day I’m drifting out in space helplessly?” He shrugged away the bad thoughts and focussed on his training. The T.S.O.S.D. Hamstronaut training was quite thorough on helping him get though the hamster-stress, which is potentially deadly.

The T.S.O.S.D. has set up a new way to train hamsters for microgravity environments by taping a drone to a large hamster ball, of course fitted on the inside with soft materials, so no hamsters will be hurt. Scruffy will be the first hamster to experience simulated microgravity.

Scruffy enters the hamster ball and last preparations are made to launch him safely with the drone. A simulated microgravity is created by making a series of parabolic manoeuvres on the vertical axis makes the hamster experience how it would feel to be in a potential future Utopian Space Station.
After launch Scruffy got used to the feeling quite quickly and he loved to just hang there. After the training Scruffy couldn’t wait to do it more often, maybe space is the right choice for him after all…