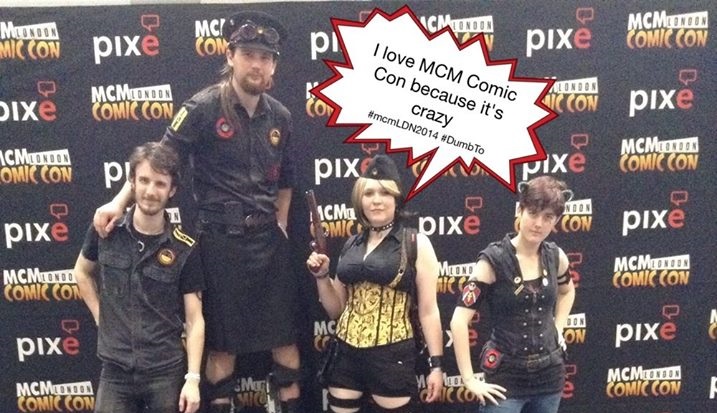 The MCM Expo in London, is one of the biggest Comic Cons in the world, and as such, as attracted a regular attendance from the Army of Toy Soldiers. LED-Master Gonzo was kind enough to send in a mission report for us to share with everyone.

I woke up early Friday morning at the hostel, having arrived the night before. Had some breakfast and went to wait for the other Toy Soldiers to arrive. When I went outside a bit of “fresh” air I saw Sean and Raptor. Shortly after that, some more soldiers arrived and we had a few drinks and laughs.

Eventually Iron arrived and went to check us in at the hostel, it turned out he had booked the hostel down the road by accident. When we walked down there we ended up in front of a door with a number-coded lock and of course we had not received the access code. Cramped in a tight maze-like corridor we waited for someone to get the staff to open the door for us.

With everything sorted and everybody got their bunks, we got into uniform to head to the Expo.

Luckily there was barely a queue at the time we arrived and could march right on through the entrance. We went for the TSU Booth in the South hall, right across the Steampunk stage and their stand. Also located close to us was the main theatre and the signing tables, so it was an ideal location for us handing out propaganda to the passer-by’s.

Friday being the least visited day, I went around the halls a few times but stayed near the booth for most of the time. Got myself some lovely goggles from the Steampunk stand, they fit really well with the hard-cap!

Afterwards we went back to play Cards Against Humanity in the hostel room. After a lot of laughs and some brilliant combinations it was time to turn in and get some rest before the hot and sold-out Saturday.

We woke up with some NERF darts flying through the room between me, Iron and Mikey. After breakfast, we put on our uniforms again. I have learned from previous visits to dress light, so it was just the basic shirt with patches for me and the engineering hard-cap.

At Expo the queues were insane and the heat even worse. The booth did fantastic! We sold not only the normal patches and pins, but also masks and earrings by Lt. Grimm, bandana’s and paintings by Lt. Sophie, chainmaille wristbands by Sniper3D and of course my LED logo’s as well!

On the Saturday afternoon there was a nice little rap-workshop hosted by Professor Elemental on the stage right across our booth, it was great fun! I met with the good Professor and looted some of his comic books, all rather splendid! After this I went to the other hall to pay a visit to Doctor Geof, also a rather splendid fellow who was pondering to declare war on us, but then he figured we’d be better off as allies, then we talked about quantum mechanics for half an hour, awesome!

Saturday ended with the traditional huge turniping tower of pizza and drinks outside. There was a lot of singing, dancing and other random shenanigans throughout the evening. When we got back at the hostel, we celebrated Iron’s birthday for which Lt. Grimm had baked a tasty cake we all enjoyed, some turned in, the rest of us went to the pub. The night was good!

Somewhere along the Friday evening I got wounded, what first felt like a pulled muscle turned out to be a bruised rib. Sunday for me was a day of pain, but I pulled through.
This time I didn’t forget to bring the T.S.O.S.D. patches and they were swiftly put on sale at the booth, they sold very well.

Sunday was filled with shenanigans and handing out massive amounts of Propaganda. I got myself one of Sophie’s paintings. Failed to get a picture with Robert Picardo thanks to queueing at the ATM and crowdedness and distractions.
Afterwards, we went to our regular spot outside, had some more drinks and shenanigans. I had a small booklet I handed out to everyone to write me something to read at home. I had an extra day in London, so I went along touristing through the city with the remaining soldiers. After our goodbyes, I instantly missed everyone already, see you in 7 months, London!

It was the best MCM London Comic Con for me so far, as they say: Third Time’s the Charm!