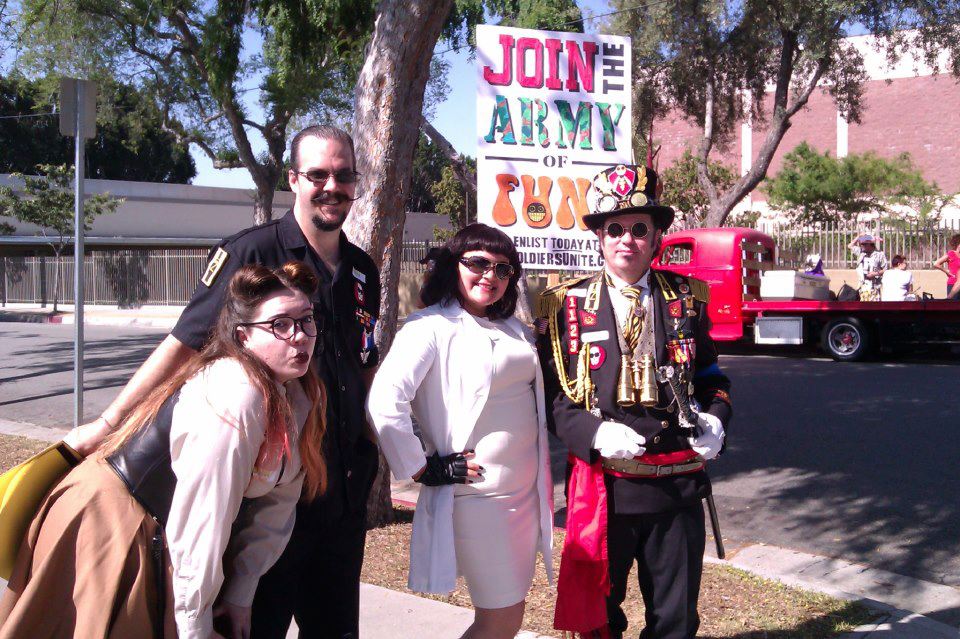 A few weeks ago, Toy Soldiers on the West Coast of America invaded the yearly Doo Dah Parade in Pasadena. Much thanks to Sky Marshall Jonny B Good for sending in this report!

The fourth annual invasion of the Pasadena Doo Dah parade was absolutely successful!

Sadly, a week before this year’s parade, we suffered the loss of Professor Jimmy Blue, who was on our planning committee. This loss was felt by all of us.

We decided that the best way to honor Jimmy was to go on with the parade and have as much fun as possible, which would have been exactly what he would have wanted us to do. Jimmy’s sister Valerie came, dressed in Jimmy’s old uniform, and marched with us. Blue arm bands were made by techiefIve and given to everyone to wear.

We were warmly greeted by the parade staff and other entrants, and this year marched in front of the Grand Marshal! (And behind an entry called “Flying Baby Hammer Throw” – Dr. Steel would have been proud!)

We were enthusiastically greeted by the crowd as well, and ran out of propaganda about two-thirds into the parade!

The parade was crazy, wacky fun, a perfect fit for the Utopian Playland. Everyone had a fantastic time, and we are all eagerly looking forward to an even greater march next year! Toy Soldiers Unite!