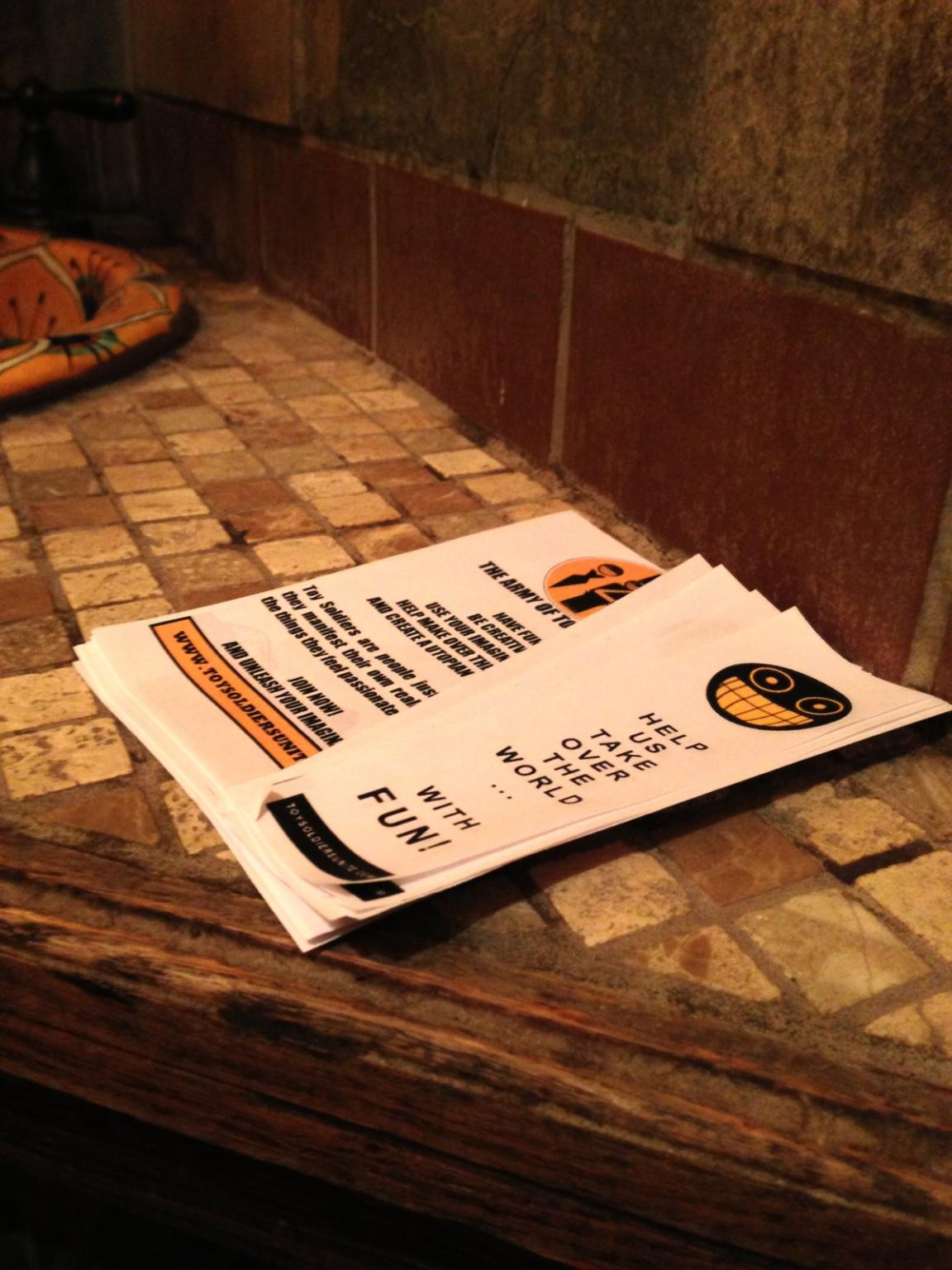 The Army of Toy Soldiers continues to grow, and with it, both new and veteran Toy Soldiers are picking up the pace in spreading propaganda and performing missions. Here’s a round up of the latest missions performed by daring Toy Soldiers!

Captain Helios von Ruin
Member of The Anthro Recon Knaves (A.R.K.) #38779; Fibonacci Division #1123 and
The Gaslight Guardians #1867
Left in the Bathroom of our local Teazer tea house:
6x copies of the Manifesto
5x copies How To Find Your Passion leaflet
25x approx. copies of TSU leaflet
25x approx. copies Bookmarks
5x TSU leaflet handed out to the people at the table next to us
1x signed copy given to our friend Least who ever turns up will definitely have some reading material while they…. occupy the bathroom.

Pvt. Blue, reporting in. Just this morning I staged a Playland in a Box at my high school library next to the sign in sheet.
Librarian alliance assures that the box shall not be tampered with, and if all goes well over the next several weeks we will be receiving many suggestions for the Utopian Playland, and even more people to start thinking about it.
Attached to the side of the box are 20 home-made business cards complete with QR code to lead any interested potential soldiers to TSU.
Now that I look back, I probably should have built a small door into the box so I won’t have to cut it open to reach the ballots. It wasn’t long before we had a follow up report from Pvt. Blue!

Message:
I decided to bring home my Playland in a Box this afternoon, and am here to report what I found inside.
Report:
1/30/13 : Seattle, WA, USA
After cutting through the bottom of the Playland in a Box, since I totally forgot to put a door in it, I found within a surprisingly great haul of suggestions! Also some obscenities, but that is to be an expected.
-50000 seesaws
-bananas and unicorns
-a large room covered in canvas/paper for everyone to draw and paint etc. on which is replaced every day!
-fake rainbow it be coo (I am direct quoting all of these, you see)
-Only if I had ALL of the information + could leave at will (I guess this person thought I was asking if they wanted a UP. Silly them, as if they have a choice.)
-sprite fountain
-lake of Skittles (I think THIS is my all time favorite. Count me in!)
-Sandwiches
-Cool (?)
-Toys, unicorns, wizards, Happy Potter, an archer
-Willy Wonka
-Bunnies
-Condoms, just to be safe. (It IS better to be safe than sorry, I suppose)
-Teddy Bears
-REAL UNICORNS
-A Flower
-Swords, lasers, acid, refraction glasses, ecstasy, smiles, glitter, music
-500 Miles the song on repeat FOREVER
-Coke
-food and Money $_$
-Food Court (x8) (I swear, four or five of these are the same guy, but the rest are different hand writings! The people truly have spoken!)
People really seemed to get into this. None of my business cards were taken, but it is clear that people are starting to think about the Utopian Playland!
Pvt. Blue, out That’s it for now from Toy Soldiers Unite HeadQuarters, however there’ll be another digest of the latest mission reports coming soon! Stay tuned!

Up Skool Active 9 hours ago