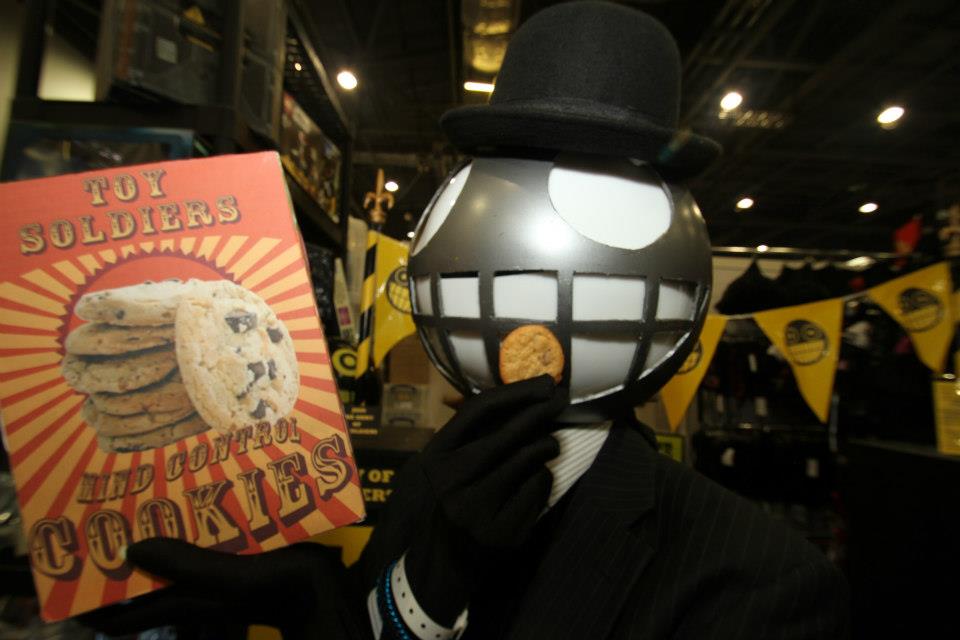 Yes, that’s right. The London MCM Expo has been thoroughly invaded once more by the efforts of British Toy Soldiers? How well did they do? Despite having hundreds of  propaganda leaflets and manifesto’s, they ran out halfway through the 3 day extravangza! This past weekend, thanks to Sir Jack of Blades, JDUK, Brigadier ‘Iron’ Davies and Monte, Toy Soldiers from across the United Kingdom (and one really tall fella from the Netherlands) gathered at their standard operating base in London, before setting forth out towards the Excel centre in Canary wharf, where tens of thousands of geeks, nerds, cosplayers, trolls, stars, guests, writers, youtubers and podcasters gather for what is the BIGGEST Comic (and other media) Con in Europe.

With a table laden with propaganda and props, Toy Soldiers spread out, meeting the likes of Dr. Geoff, Zee Captain and Mr Snippy of Romantically Apocalyptic, Humon of Scandinavia & The World, the writers of Cyanide & Happiness, Warwick Davies, and a plethora of cosplayers looking absolutely awesome. And naturally, Kipling and 3D Sniper had their camera’s to hand, taking an inordinate amount of photo’s that are already up on facebook, but will also be added to our own galleries (see below).

More awesome creations came in the form of Robot heads, created by Lt. JDUK and Corporal Tink. More specifically, Lt. JDUK created a truly British Robot that was fueled solely by tea! And Corporal Tink succeeded in confusion people with her wearable head, that no one else could wear except her. We suspect it has to do with internal nanobots rejecting heads other than her own. Oh and some other guy made a robot head as well.

All in all, the Army of Toy Soldiers have once more shown their ferocity and dedication to making the world a better place, not to mention a serious amount of fun. As some of you may have seen, it has lead to an influx of new recruits to the website, so the message is getting out there, to steampunks, dieselpunks, cyberpunks, transhumanists, makers, creators, musicians and artists.

TSU-UK, we the Army of Toy Soldiers salute you!