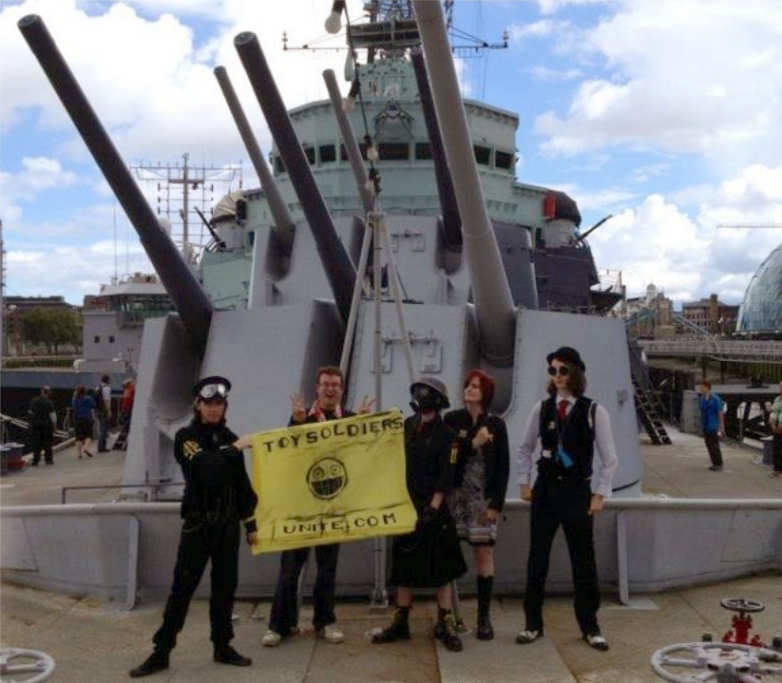 Alright, so that last part didn’t actually happen. But had the Toy Soldiers been equipped with large NERF foam darts to put into the cannons, we’re sure that would’ve happened.

Toy Soldiers Pvt Morglum, Mike McNanner, CBM & Dearest Maximilian GF Sharp met up in Camden on the 25th of august, to discuss their plans for infiltrating the HMS Belfast, a battleship turned museum on the river Thames.

While en route, the authorities must have been tipped off, as a police officer stopped them to make sure they weren’t doing anything…. ‘silly’. Considering one of the group was a short, kilted, bearded and pig-tailed it was a bit of an odd question. However, thanks to the amazing brainwashing powers that these British Toy Soldiers possess, the officer was placated, and let them continue onwards, meeting up with JDUK.

Once they arrived on board the HMS Belfast, awe and wonderment struck the soldiers. CBM put’s it well “fascinated by all the rivets, intrigued by the smells, terrified by the creepy mannequins, unsettled by the amount of asbestos everywhere & those of us in dresses/skirts/kilts were embarrassed by having to climb lots of ladders.”

After much exploration, and taking pictures, a landlubber called from ashore, declaring themselves Smook the Tall. Unfortunately, this toy soldier had brought rain with them, and thusly they retreated back inside the belly of the ship for tea and crumpets. It seemed for a while that they were in a horrific storm, as lightning flashed and thunder roared, yet the soldiers continued their mission, exploring the upper levels of their newly acquired vessel.

After many “Oooh, look that that.”, “That’s bloody creepy.” and “I want that in my house” (don’t we all?), and being distracted by shiny things, with lights and buttons, it was time to call it an end to their day. After successfully brainwashing the crew of the ship, ensuring that it remains in the Toy Soldier Army’s possession while unattended, the squad of Toy Soldiers made off for Forbidden Planet & Cyber Candy to acquire munchies and the like.

All in all, it appears that these Toy Soldiers of the British Isles performed a highly successful invasion. We salute you!