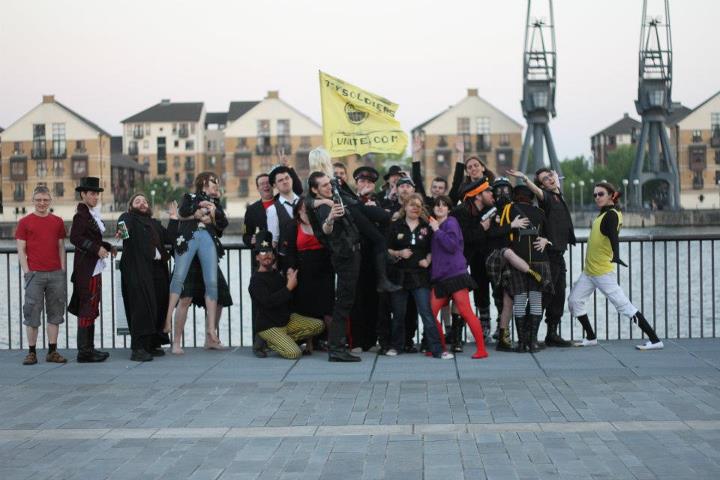 The MCM Expo in London is one of the biggest comic, movie and media con’s in Europe, and for the Army of Toy Soldiers in the UK, one of the greatest places to invade. And so, a great group of them descended upon London this past weekend to do just that! Three and a bit days of propaganda spreading, brain washing, dancing, singing, and of course after hours drink (and probably some before and during hours as well), TSU-UK pulled off an absolute brilliant invasion during a sweltering hot weekend.

Kipling, together with apprentice photographers Evelfa, 3D Sniper, and Baron Andrew Von Jazz took nearly 2000 pictures and videos, the majority of which can be found on facebook. We obviously can’t feature them all on TSU, but the finest one’s will be selected and uploaded to the galleries here.

Sir Jack of Blades, Evelfa and Monte deserve honourable mentions for setting up and helping organise the invasion. Without them, it wouldn’t have run nearly as smooth as it did. Monte’s own company Oojamaflip had even been requested to entertain the visitors at the front of the ExCel centre where the Expo is held, and was occassionally joined by TS Spoon, Jog, and JDUK who was wearing a truly marvellous Robot head (with voicebox!). TS Spoon deserves a special mention as well for being the first one at the table EVERY morning, despite the massive crowds, delays on public transport, and the heatwave that hit London.

On the saturday evening, Toy Soldiers also managed to absolutely SMASH their previous record when it came to ordering pizza (yes, this is considered something vitally important by the Brits). A very confused delivery driver appeared near the grassy field, with nearly 30 pizza’s and sides, Sunday it was time for the cosplays, and Toy Soldiers look absolutely brilliant dressed as Batman Villains.

After a hard day of fun, the soldiers relaxed with a copious amounts of playing, include fire poi and fire breathing, hula hooping, running around with NERF guns, then finally concluding the night with much hugging and reluctant goodbyes.

All in all, the invasion of the MCM Expo could be nothing but a rousing success! Well Done TSU-UK!