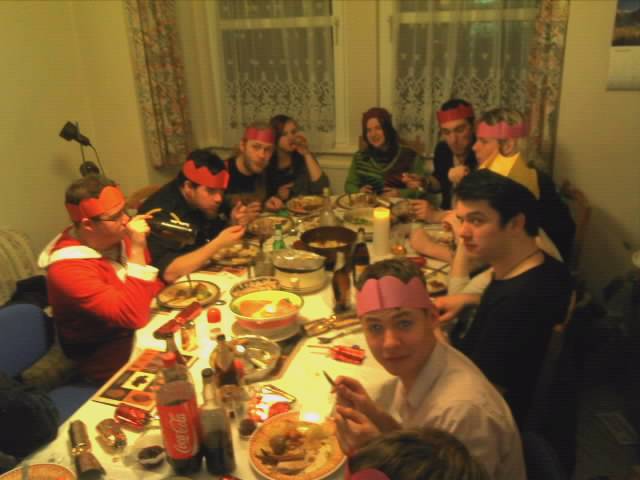 That time of the year has come and gone, of good-will, merriment, cheer, and of course, scoffing your face full of foods that took all day to prepare before falling into a comfy sofa and chatting with friends and family.

TSU-UK celebrated this Steelmas, with a very hearty weekend, hosted by our Lt. Grimm, who opened her doors to all, and made sure everyone had a good time.

The weekend (as ever for TSU-UK) began with a saunter down to the Hobgoblin public house in Camden, where much liquid merriment was to be had. The evening even turned into something of an invasion, as several people were randomly grabbed off the street, handed propaganda and told to sit down to have a drink!

It was the day after though that things would become interesting, for not only was it Steelmas, but a challenge had been laid down between the genders for who had the prettiest legs. Kilts versus mini-skirts.
I think it’s safe to say, the guys did not win, though it was not for a want of trying.
During the afternoon, secret santa gifts were exchanged, ranging from homemade jewelry, IRC commands manifested into wooden mallets, and of course a certain brand of foam dart gun.

All in all, 18 toy soldiers turned up for a fantastic Steelmas dinner, prepared by our hostess, with turkey, roast veg, stuffing, salmon, and all the fineries. Experimental alcoholic beverages were provided for by Brigadier Davis and Sgt. Dutch, though it appears Brigadier Davis had acquired the power to turn Mead into Cider.

Every year, Steelmas/Toymas is celebrated by Toy Soldiers around the world. We want to especially thank Lt. Grimm for hosting such a fine gathering. Once more, she’s gone beyond the call of duty.

We also want to hear from you and what you got up to over the holidays! Share in the comments below. Kudos to anyone who got Nerf guns!

Up Skool Active 8 hours ago