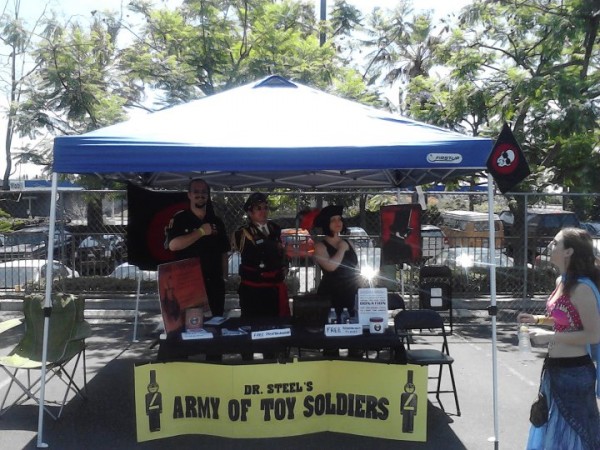 Avast matey! There be toy soldiers on the high seas! Well, whatever seas they have in Santa Anna, CA, where soldiers of Division #1123 The Fibbonacci Division propagandize land lovers and raided vendors and booty throughout the festival. Pyrate Daze, an annual convention that joins the golden age of pirates with the romantic age of steampunk, has been a hallmark invasion for the west coast for many moons. Traditionally led by Sky Marshal J. B. Goode, the peppy pillagers dispersed the simplest form of propaganda one can conceive: water. Regarded as “free brainwashing fluid,” simple cups of ice water accompanied with Dr. Steel stickers were enough to encourage dehydrated sailors to stop by and inquire of our fellow soldiers wares.

The Toy Soldiers also made a film that was aired several times during the festival, an educational piece to show the masses what it is Toy Soldiers do while secretly secreting mind control earwigs into the audience. Additionally, the soldiers collected donations for the annual Toy Soldiers Unite to Light the Night Walk in October, letting passersby know that Toy Soldiers are not only fun-makers but also philanthropists.

By the end of this glorious adventure, treasurer towering high, the buccaneers were invited to plunder future events and gatherings, a welcome addition to any delirium. Regain hope, all ye who enter here. There be Utopian Playlands ahead.