You are here: Home / News / News / The Soldier Sushi Sensation 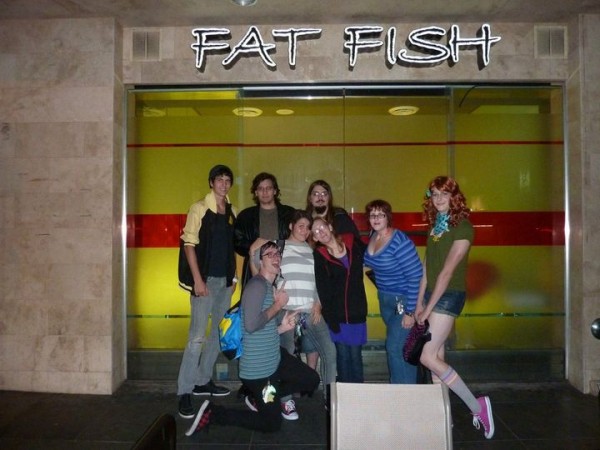 It has been said that folks in California only eat sushi. Well, the soldiers of Division #1123 The Fibonacci Division have decided to play the rumors to their advantage by enacting monthly Soldier Sushi meet-ups! Always on a Saturday or Sunday (out of division leader Captain Nurse Risa’s inclination for alliteration), members of the division gather at a restaurant called Fat Fish in Los Angeles’s Koreatown district where they partake in fresh and flavorful conveyer belt sushi. For those who have never experienced such delights, one simply sits at a bar with a conveyer belt in the center. Chefs in the middle are constantly adding fresh sushi dishes, and you simply take what you like off the belt as the items pass by. And thanks to the all-day happy hour, prices are super cheap, enabling even the most strapped-for-cash of the crew to partake. Some soldiers are even starting to be recognized by the eatery’s staff as regular attendees, boding well for future accommodations for the growing group.

Soldier Sushi nights have been proving extremely helpful in increasing activity in the division, waking up several “sleeper” soldiers and even gaining a couple new ones! While the attendees of the event do not actively recruit during the dinner, the bring-a-friend concept has encouraged said friends to enlist after meeting the merry members. This tasty type of tactical playtime is an excellent chance for the busy bunch to get together and discuss future division plans as well as just general jolliness. A recent addition this past August 21, 2011 now includes a trip to Pinkberry, a popular frozen yogurt chain, following the feast since it is located right next door.

Soldier satiation is usually followed by a game or movie night at a nearby residence, but there is talk of tacking on a midnight movie at the weekly Rocky Horror Picture Show venue. The next Soldier Sushi Saturday will be September 17, 2011 at 6:30pm, and already excited soldiers are salivating in anticipation! Simple events such as these are an excellent way to amp up division activity with minimal cost and preparation. Not to mention a great excuse to see one’s fellow soldiers!